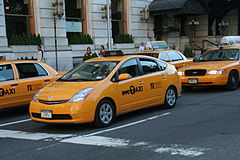 First off, it looks like my car is okay. The dealer said that there was a broken bracket in the exhaust shaft. I am not clear what that means, but it only cost me the original estimate. If you have a Nissan and you need someone to look at it, take it to Mid City Nissan on Irving Park.

I will be going to meet up with some friends in Oak Park in a while. Hopefully things will work out with regards to my car. We shall see. It felt okay driving back from the dealer. Hopefully I can take it all the way to Texas later this year.

Also, there has been some more “buzz” about Governor Goodhair (aka Rick Perry) running for president. He is also having a prayer rally on August 6 in Houston. The Texas Freedom Network has a few posts about it. So does Dispatches From The Culture Wars.

I will post more about Governor Goodhair later this weekend.

BTW: I don’t own a Prius. I just think it looks better than my car.