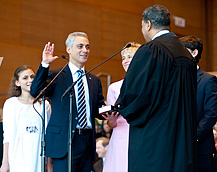 Yesterday Rahm Emmanuel was inaugurated as mayor. A lot of people think that having a new mayor will revitalize our city. Maybe it will, maybe it won’t. I hope things get better around here, but I don’t know if it will be enough to get me to stay.

At the hour of the inauguration, I was on the CTA. There was a delay due to some signal problems. So I was on the CTA for an additional 30 minutes. I think it was pretty ironic. The start of a new era and I was motionless.