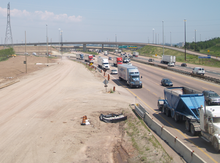 I had planned on posting at least once a week. But last week I was not in a good mood at all.

I went to see a few friends in Oak Park, and I had another event planned in the city. So I had to drive back in. But traffic ground to a halt on Lake Shore Drive. So I got off, and wound up taking a detour. Some of the detour was on streets that were unfamiliar, so I spent some time going in the opposite direction that I wanted to go in.

Other streets were crowded and slow, and others were under construction. We have had construction all over the city for as long as I can remember. Why can’t anyone in this city build a road?

I went down to Texas last year, and from what I remember the roads seemed better. They do love their cars in Texas.

Another thing that happened is that I was talking to someone who had interviewed with a job in Denver, and I am now thinking about going to Denver. But I am still leaning towards Texas.