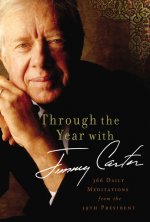 A book I finished recently is Through the Year with Jimmy Carter. He teaches Sunday school lessons at his church in Plains, Georgia. I have been there a few times, and got my picture taken with Jimmy and Rosalynn Carter. I also have a few of his lessons on tape. The lessons span from his time as president to the year the book was published.

Each page has a Bible verse, and a short essay on the passage. I think the essays were either updated or written for the book. For one of the lessons dated in the 1970s references the wars in Iraq and Afghanistan.

On lesson 116 he shares his favorite verse of the Bible: Ephesians 4:32 “Be kind and compassionate to one another, forgiving each other, just as in Christ God forgave you.” He has joked that when he was a child, his favorite Bible verse to memorize was John 11:35: “Jesus wept.” You can’t get much shorter than that.

One of the times I went down there was July 4th weekend in 2006. The lesson was on July 2, 2006, and this was covered in lessons 325, 332 and 333. 325 was “Marriage Advice from a Former President”, which also had some advice from a former First Lady. They do a lot of stuff together, but they also give each other some space as well. 332 was “Divorce Court”. He pointed out that when he was growing up there were no divorced people in Plains. But there were a lot of people who were living with someone other than their spouse. He said he thinks divorce is wrong, but he doesn’t think adultery is any better. He and Rosalynn have been married since 1946, but a few of their children have gotten divorced. Their children are happier in their more stable, second marriages. 333 was “Advice to Widows”. I don’t remember him covering that when I was there.

I have heard/read somewhere that he prefers the Revised Standard Version. This book is published by Zondervan, and uses verses from the New International Version, which Zondervan owns the rights to. He also has another book from Zondervan, which I assume uses the NIV. I wonder if he has changed translations.

7 Replies to “Through the Year with Jimmy Carter”