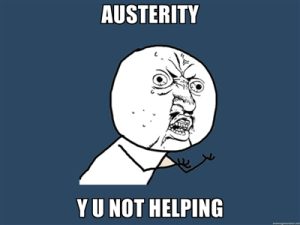 So austerity has been in the news a lot lately. A lot of gold bugs, glibertarians and conservatives push it as a solution to a sluggish economy. I think that they push it because they are either jerks, pay little attention to reality or cause and effect, or some combination of the two. Sometimes these people are called “Austerians”, since they push austerity and subscribe to Austrian economics.

It sounds like a good idea: There is a lot of debt, so governments should cut back on spending. The problem is that nobody else is spending. Keynesians, like Paul Krugman, say that governments should spend more. Austerians think that Keynesians think that governments should always spend through roof, when in fact if you ask the Keynsians themselves they will tell you that they only favor deficits when nobody else spends money. I think Krugman portrays his side more accurately than the other side portrays him. Plus, like many, I am amazed at all the conservatives who only seem concerned about government spending when we have a Democratic president.

The Austerians have been predicting that we will have an economic disaster (hyperinflation, much higher unemployment, contracting GDP) for quite a while. Yet even though their predictions never seem to come true, they never change their predictions. As Krugman said of Rep Paul Ryan, his “complete lack of self-reflection is nonetheless something wondrous to behold.” Maybe things will get really bad. But a lot of people seem to predict disaster no matter what happens.

Then there is Zero Hedge, who think that always predicting the ever-imminent collapse is itself proof of knowledge. In one of their articles, they write “we are generally of the opinion that it is in any case impossible to decide or prove points of economic theory with the help of economic history”. That sounds like a fancy way of saying: We just make this stuff up.

A critic of Austrian economics is that it is “economics without math or models”. The Wikipedia page states that “Critics generally argue that Austrian economics lacks scientific rigor and rejects scientific methods and the use of empirical data in modelling economic behavior”
It seems to be true for whoever wrote that Zero Hedge article. If you don’t use history to prove your economic theory, then how can you know if your theory is correct? Then he says that austerity can work because it is working in the Baltic nations. So maybe the just look at the present and ignore the past. But that still doesn’t seem too bright. You should base your predictions on as much data and knowledge as possible. And if you’re just going to make stuff up, why can’t other people do the same thing?

Maybe it’s working in the Baltics (which may be due to the fact that in some of those countries about 15% of the population has emigrated), but it’s not working in the UK. In fact, there is now talk of a triple-dip depression in the UK. Why is the austerity crowd taken seriously? How many times are they going to say, “Just wait! My predictions will come true any day now! Really!”

Image generated by Memgenerator. And, yes, I now realize it should be “Y U No..” instead of “Y U Not..” Y U No give me brake?

5 Replies to “Thoughts On Austerity”