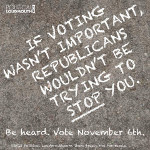 I have voted in every election since I turned 18. I recently moved to Texas, and I got my registration card the day before the election. So my voting streak is unbroken.

I know a lot of people who do not vote. They think there is no point and that nothing ever changes.

There is a great line I have seen on the web: If voting is not important, why are Republicans always trying to stop you? I have noticed the Same Old Party goes on and on about invalid registrations. So their solution to this non-existent problem is to purge the voter rolls. They never seem to have any interest in registering people properly.

You have probably heard about or heard the recording of Mitt Romney’s statement about the 47%.  That was at a fundraiser with an admission price of $50,000. That is about the median income in the US. I bet the people at that fundraiser all voted.

If you don’t vote, you give people who can spend your annual salary in one night even more power. You are giving them more say in our government. You are causing the very thing you say you want to prevent. Granted, it takes a lot of median income people voting to equal the voice of a wealthy person. But if you don’t participate, then who will?

I think it’s funny when people say that there is no point in voting because it never changes anything. By itself it might not do much. But if you are not willing to stand in line to press a button every couple of years, then what are you willing to do to change society? If you won’t press a button, then how exactly is society supposed to change?

I think that slowly things are changing. People are starting to realize that a lot of things happen at the state level. The Trayvon Martin incident. The Wendy Davis filibuster. The Moral Monday protests in North Carolina. I think people are staring to organize. Secular Texas is part of this.

This really hit me after a few exchanges on Twitter (archived here). Do not ignore what happens at the state level.

Image from Bobbi’s Blog, originally from Political Loudmouth, although I could not find it there