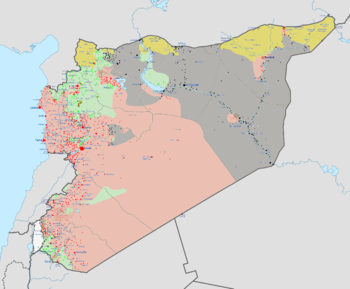 I saw a few posts on Business Insider about military members saying the USA should not intervene in Syria. (See the posts here, here, and here.)

I have also seen a few articles online from conservatives saying we should be careful because intervening could have “unintended consequences.” Some of the same commentators saying we are moving too fast on Syria are the same people saying that Obama did not act quickly enough in Libya.

Should active duty military be speaking out on policy? Can I yell at them that they are not “real Americans”, just as some people yelled at me at anti-war protests during the Bush administration? Yes, there could be unintended consequences. News flash: Every policy could have unintended consequences, whether it is pushed by someone you voted for or not.

A lot of people did not want to hear about any potential negative results from attacking Iraq. I guess a lot of people thought the Iraqis would buy mega-mansions, fill them with big screen TVs, and drive SUVs to mega-churches. Sectarian conflict, providing practice for al-Queda and a stronger Iran were considered impossible. And woe to anyone who was not on board.

It seems like a LOT of people only see potential downsides to military intervention when we have a Democrat in the White House. It seems okay to openly defy a Democratic president, as Colin Powell did over gays in the military.

I am sure there is always debate in the military over every policy all the time. Why is it that it only seems to become public when we have a Democratic president? Why do so many people turn their brains off and just obey when we have a Republican president?

In one of the posts, there is a photo of a soldier saying they do not want to fight for “Obama’s al-Queda rebels”. You guys had no problem fighting for Bush’s Shiite thugs (many of whom got support from Iran), so why is this an issue now? Another says he did not sign up to die for corporations. I am guessing he was not in the military when Bush and Cheney were running things.