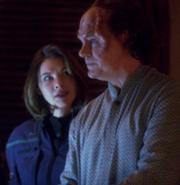 Star Trek has a history of touching on social issues. One of them is religion.

Although it is fiction, and deals with technology that may never exist and aliens who look a lot like humans, sometimes it does express a skeptical/scientific view on things.

There is a quote about evolution in the Enterprise episode “Dear Doctor” that I liked:

“Evolution is more than a theory. It is a fundamental scientific principle.”

Interesting that Memory Alpha has a page on evolution. Here is a quote from that page:

Ronald D. Moore commented: “Trek […] accepts evolution as a believable and valid theory. Gene himself felt this very strongly and although we do try to embrace many points of view and many beliefs, there are some matters on which we do make our feelings known. That said, I also think that anyone within the Trek universe who espoused a “creationist” or similar view as to the origins of life would find their beliefs respected — “respected” being fundamentally different than “believed.” (AOL chat, 1997)

I don’t know if Gene Roddenberry actually said these quotes, but his page on Wikiquotes has quite a few about religion. Here are two that I like:

3 Replies to “Star Trek And Evolution”