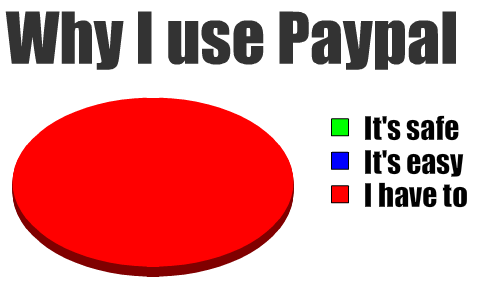 Last week Paypal bought a company in Chicago called Braintree. They make software that processes credit card payments. They guys at Braintree are smart (on some levels), but also a bunch of arrogant jerks. I am sure they will fit right in.

I once attended a presentation by a Braintree big shot. It was either the founder or the CEO. He said that he has spent all his career in startups. He also said he would rather hire someone who is young and smart than  than a middle-aged developer who has spent all their career at an insurance company. I was pretty shocked that someone would admit to age bias in public. I was also struck by the Startup Psychosis this guy had. See, according to people with Startup Psychosis, those corporate people are just not flexible in their thinking, especially corporate people who want to transition to a startup environment. But if you have been in startups your whole career, by definition you have agile thinking! Really, you do! Tell yourself that, because that is what makes it true!

It seems strange to me that people in the startup culture all think the same, talk the same, all read the same books, yet they all tell themselves they aren’t conformists like people who work in government or corporations. I still say that governments and corporations are more likely to produce goods and services that people actually care about.

I kind of hate it when people say they just want to hire smart people and do not care about what your experience is. Whenever I talk to those people, I always get told that they want someone with 5 years of X and so-many years of Y. I don’t claim to be the smartest person in the world, but I am smarter than some of the people at these “we-just-want-smart-people” firms. Maybe some of the people I interview with don’t like me. If you don’t like me, just say so, I won’t be offended. If you don’t like me, I probably don’t like you either.

I think that part of it is that a lot of people who say “we just want smart people” might believe what they say, but don’t realize that they might not want what they think they want. Also, I think some firms want younger guys because a younger guy will work longer hours because he doesn’t realize he doesn’t have to let some jerk walk all over him.

I attended a technology meetup at Braintree, and some young punk (with an Apple laptop, of course) said he did not understand why they had an Android API. After all, he said, “Everybody has an iPhone.” I told him I did not have a smart phone, and there are a LOT of people with Android phones.  I said, “Maybe everybody you know has an iPhone. That’s not the same thing.” He seemed offended, but frankly he deserved it. If you think you are a smart person, and you also think that everyone is like you, then you are not that smart.

It is interesting that they sold out to Paypal. A lot of people do not trust Paypal. One of the reasons some firms use Braintree is: They are not Paypal. That reason just went away. I predict a lot of people will look at alternatives. I doubt I will ever see the agreement, but for now Paypal is saying they will not get involved with Braintree. If the guys at Paypal and Braintree think anyone believes that, they are idiots. If Paypal is not going to muck with Braintree, then why did they buy it? And if Paypal changes their mind, Braintree can’t say no. If they think they can, their definition of “ownership” is different than everybody else’s on the planet.

If the CEO thinks that Java developers at insurance companies can’t change their stripes but Paypal can, then he might have more flexibility in his thinking than I gave him credit for. Or he’s just sucking up to his new masters.

This transaction exemplifies one of the fallacies of capitalism: That anything that happens in the private sector benefits all involved parties. Paypal gets some good technology. The big shots at Braintree get to cash out. The users of Braintree just lost their main reason for using Braintree in the first place. This transaction is wonderful for all those VCs and big shots who have spent all their lives in startups, but it is not good for the customers. Telling your customers to hope people they don’t trust won’t change their minds is not a good long-term plan for your customers.

If I know that some people use Braintree simply because it’s not Paypal, then I have a hard time believing the guys at Braintree were not aware of that. Yet they sold to Paypal anyway.

Enjoy your money, guys. Nobody will ever trust you again.