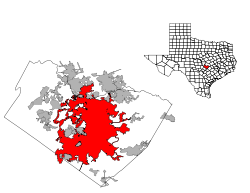 When I moved here, a friend of mine from college let me stay for a couple of months in a condo she owns. I spent that time looking for a more permnanent place. It was harder than I thought.

I was still on a contract, not a full-time employee. Some landlords had a problem with that, others were concerned that I had been unemployed. I made a copy of my savings account statement. I have enough in there to live for a year. The guy at the bank was impressed, but apartment companies did not care. If you brag to other states about all the jobs you have, you are going to get some people with spotty histories. I wondered that if someone had no job and no savings, then would they be able to find a place to live here? So much for second chances.

Just about all the apartment complexes have a pool, which I have no interest in at all. I guess it’s nice if a family has kids, but I still do not like the fact that I have to pay for something that I do not want.

Costs are starting to go up here. I was paying $675/month for about 575 square feet. I looked at a few other places, but I was not able to find anything better in time. Besides, I think with moving I would come out behind. But still, my rent is now $715/month. A new person moving into that space would pay $750. I am also paying more for cable, as I have mentioned before.

I would have liked to find a studio like I had in Chicago, but I could not find any small apartments. I did not want to live near campus. I have heard that everything around campus is very expensive.

There is not much mass transit here. There is a system that seems geared towards the university. Needing a car to go everywhere is a real drag. My brakes started making some grinding noises, and I thought that I might need a new car. But I got them fixed.

Plus merging onto and off of highways can be a pain. When you go onto a road, you are merging to your left, but when you get off you merge to the right, into the same lane as people merging into the traffic. I am surprised there are not more accidents. I wonder why the roads were not designed such that you enter on the left and exit on the right.

There are a lot of yoga studios here, as well as a few Zen groups. I would like to spend more time on those. I might look into living in an “intentional community”. There are a couple of those in Austin. I’ve been unemployed, so technology takes priority over other things. So if Secular Texas meets on the same night as the Groovy/Grails group, I go to Groovy. So I am not as involved in the atheist community here as I would like.

The atheist community is not as large or robust as I would like. There is a podcast made here called “The Atheist Experience”. I have not gotten around to listening to it yet, but a lot of people in other parts of the country listen to it. I somehow got the impression that the atheist/skeptical community would be bigger. I have heard that the people who make the show do not mix much with the other atheists in Austin. There is no group with the work “Skeptic” in their name.

There is a branch of the CFI here, and that is a good group. They usually have something once a week. Secular Texas is a spin-off of that. They also have a group for atheist/skeptic women called Secular Suzies. Perhaps I will find my dream woman in Texas.

I have been going to quite a few meetups. There are a few oriented around games and science fiction. Geekdom is pretty large. It is for people who are into science and technology, as well as science fiction, fantasy, comic books, and stuff like that. Sometimes somebody there gets on my nerves. There is a LOT of science fiction out there. If you think about how much there is to “Star Trek”, “Star Wars” or “Doctor Who”, there is a lot of stuff. I hate it when someone quotes a movie or something, and I ask them what they are referencing, and they will look at me like I have two heads and say, “Haven’t you seen XYZ?” No I have not. There is a lot to see.

I have also started going to the Austin Celtic Meetup. When I was in Chicago, one of the most Irish cities in America, I never really looked into Irish or Celtic culture. But somehow I found out these guys were giving Gaelic lessons, so I decided to go. In Chicago I also went to the Latino Atheists group, and now I live in an area with a lot more Latinos, yet I do not really know too many Latinos.

I have met Hispanics who grew up in Texas, yet do not speak any Spanish. Granted, it has only been a few so far, but it was surprising. It seemed odd since this used to be part of Mexico.

Sometimes I think Austin needs to get over itself. I am sure there are people who grow up in small conservative towns all over Texas, who dream of the day they can get out. To someone like that, Austin would probably seem like heaven. But if you have lived in another big city (like Chicago, Portland or Madison) or another college town, it is easy to look at Austin and not see what the big deal is. I guess nobody told them that it is not the only place in the world with a few blocks of bars.

I said this at a meetup, and there was a woman there from another part of Texas, who told me that “you just don’t get it. I have lived all over Texas, and Austin is different.” I did not respond, because it was hard to without calling her stupid. I stated I had been here less that a year. Maybe Austin is unique compared to the rest of Texas, but if you think about the whole country it is not that unique. Besides, if you cannot think about the world beyond Texas, then perhaps Austin is not the place for you.

I don’t know if I will spend the rest of my life here. I would like more control. Right now I do not feel like I have it. Things are not going too well at my job.

Everyone has the best BBQ in Texas. It’s like a religion. They can’t all be right. One guy from Chicago thought it was funny that Austin has a reputation for good food and restaurants. He said it’s a good place if you like beef.

One of the things that was really bugging me about Chicago was there always seemed to be parades, or street fairs, or art fests, or streets getting closed so a few hundred people could ride their bikes. Buses were getting re-routed for these things, and it could make it hard to drive around. If I want to go somewhere, I just want to get in my car (or on a bus or on a train) and go from point A to point B. I shouldn’t have to check a website to see if I need to change my route.

Now Austin has Formula One. (It might also get a soccer team, or something.) I had to travel for work the same day as Formula One (or the day after). So it was really crowded. I would like to live someplace where I can just go about my business.

One thing about Chicago that I really did not like was the constant sirens every night, and sometimes all day. Here I can go several days without hearing a siren.

I have noticed that people from different parts of Texas seem to not like Houston.

People keep mentioning that Texas has no income tax, as if that is the only reason to live here. It is easy to have no income tax when you have oil. Sales tax seems pretty high. Perry is trying to convince more people from blue states to move here. Why not try to recruit from states that have Republican governors? If you are goint to brag to people in New York about Texas’ lower costs but not do the same for New Jersey, then you are a liar, an idiot, or both.

Those blue states have higher taxes because they actually build roads and educate their kids. (So Perry is a typical conservative: Someone else foots the bill, and he takes the credit.) If people in Texas want the growth to continue, eventually they will have to start paying for roads and schools. Either Texans will start paying more, or the model will break down. You can’t steal smart people from other states forever.

Sometimes I think that this is all a dream, or illusion. I’ll be putting gas in my car, and I will think, “This has been nice, but I am going to go to sleep tonight, and tomorrow I will wake up in Chicago, and get on with my life.” Over the past few days, I have thought a few times: I was in Chicago, then I was in Austin, now I am here. How did that happen?