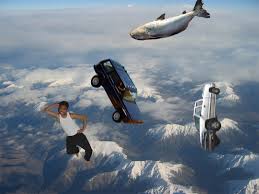 I have been travelling back and forth from Austin to Boise, Idaho for work over the past month. So I have spent quite a bit of time on airplanes and at airports. I have overheard a few interesting conversations.

On one flight, there was a guy who worked  for a “non-denominational” christian organization. It was either a school or a non-profit, I cannot remember. I think it’s kind of funny when christians label themselves “non-denominational”. They seem to think this implies an objectivity or neutrality that does not really exist.

At one point he said that as a society “we put too much faith in science.” I thought: You are in a metal tube filled with flammable liquid suspended thousands of feet in the air. You’d better have some faith in science. The taxicab fallacy at its finest.

If skeptics and atheists have “faith in science“, it is not faith in the sense of worshipping an invisible deity whose behavior is consistent with non-existence, or belief in things without proof. It is the assumption that since the scientific method has increased our understanding of the world in the past that it will continue to do so. I think that as long as religion claims to be a method for understanding the world, it will always be incompatible with science. Besides, if religion had anything to do with technology, why didn’t god tell people how to make airplanes 5,000 years ago?

Lastly, one time when I got back to Austin it was about 35 degrees Fahrenheit. I heard someone say that the day before it was in the 80s. Climate scientists have been predicting temperature volatility for years. Yet many people still think it’s a big hoax.