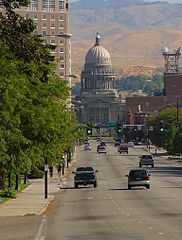 I am done with the assignment in Boise, Idaho.

I was not too thrilled with the idea of going there, and I would not want to live there, but all in all it was okay. If I get sent to another mid-sized city in another state, I won’t complain too much beforehand.

I was working on a state government project. I mostly dealt with other software developers, and testers, scrum masters, some infrastructure people, stuff like that. Almost all of them were contractors. Only about three were actually state employees. A lot of them were from India, and four were from Nepal.

People in startups can rave about their small companies all they want. I have noticed that government and corporate jobs have one thing a lot of startups do not: a chance to be around some beautiful Indian women. Granted, I doubt that any Indian woman would want me to touch them with my ten foot pole. (See what I did there?)

One reason I would not want to live there is that it is a pretty small city. If you lose your job, where do you land? There are not too many places to go from what I could tell. One local did mention the name of one local company that got acquired. It may have been Ore-Ida. They were bought by Heinz in 1965. There was a big office in Boise until 1999.

As far as tech, there is Micron, HP, Microsoft, Google and IBM. I think that Google, Microsoft and IBM are mostly just sales or call centers, so they really do not have much for a tech person. I went to the Java user group and met a few HP people there. And, of course, there is Micron, probably the biggest tech company and largest public company in Idaho. At first it seemed like Micron was the only tech company that locals could name, sort of like for a long time the only tech startup in Chicago anyone could name was Groupon. But Micron is not useless.

Did I mention there were some hot Indian women there?

One thing I noticed about the downtown area is there are no large chain stores, or even small ones. Chicago has a lot of Walgreen’s and CVS stores in the Loop. But the area near the capitol was all local businesses. I did shop at WalMart. There is a local grocery chain called WinCo which for a while I avoided since they do not take credit cards. Say what you want about large corporations, they can be pretty convenient. But one day I was pressed for time, so I went in there and the prices were about the same as WalMart.

And there were some hot Indian women.

One Indian guy said that while waiting for the bus he did get hassled by a nutcase. The guy asked him if he was Muslim, and went on about how Obama is a Muslim.

I did go driving a bit into the mountains. It was okay, but both times I turned around after a while. The roads are really winding, and there are no guardrails for large portions. I decided it would be best to turn around and stay on flat ground. I would hate to drive those roads when there is ice. One weekend I did drive to Oregon to get the map. I went to Portland about a 15 years ago, and later I started getting the map of every state I go to or drive through. I did not get maps for the states that I have layovers in.

It got a bit cold during the polar vortex, but a lot of people said Boise does not get as cold as people think. You can ski in the mountains one day, and golf in Boise the next.

Not to mention some hot, exotic South Asian ladies.

A few times would see someone while waiting for the flight in Boise, and I would see the same person in Austin. I think the reverse happened a couple of times as well. What are the odds of that? I thought that was strange. Aside from a consulting firm that works with state governments, how many people would need to take this particular trip? Is there some subculture of hipster snowboarders that I have not heard about?

I did speak to an elderly couple in Austin who were going to Boise. I do not recall them saying what brought them to Austin. The wife said they grew up in the same small town in Iowa, got married, and raised their kids close to where they grew up. I cannot remember why they went to Boise, but she said that if they did not leave they would die in Iowa. I don’t think they hated Iowa per se, just the idea of spending their whole lives in one place.

For a while it got kind of surreal. I would go for a couple of weeks without much contact from anybody in the company that actually employs me. I would fill out timesheets and submit expenses, and I would get paid. But it seemed kind of odd, like I was on some assignment that time had forgotten. Sometimes there were five of us there, sometimes it was just me.

And, of course, there were some attractive Desi lay-deez.

When I was in college I was placed with a Korean roommate, so I wound up with a lot of Korean friends. One of them, named Jin, said that he thought Indian women had beautiful eyes. I do not recall what I said in response. It is not the part of a woman’s body that first catches my attention. But after he said that, I started looking at Indian women’s eyes. And he was right.

Koreans and Indians both enter into arranged marriages, although I think these days Korean marriages are less arranged than they used to be. Jin told me that his parents really did not speak to each other very much. I asked him why don’t they get divorced, and he said that amongst Koreans divorce is just not considered to be an option. After he told me that, it did seem that there were a lot of unhappy elderly couples amongst the Koreans at the church I attended in college, and amongst the parents of Koreans I met later.

Granted, this is anecdotal, but it seems like Indians deal with arranged marriage better than Koreans. They are not glowing, but they are not miserable or as distant towards each other as Koreans seem to be.

Most of the Indians there were married. Two of the Nepalis were married to each other. They had been married for three years, and this was the first assignment they had where they were together. One woman had recently gotten married, and her husband was in California; one guy’s wife was on the East Coast. They would fly out once a month to see their spouses. I don’t think their spouses left the coasts to come to Boise quite as often. Another guy had recently gotten married, and his wife left her job in India to live with him. She was looking for work in Boise. I think they were also looking for work elsewhere as well.

My impression is that none of the Indians knew how long the assignment would last for them. The guy whose wife was on the East Coast had been on an assignment in New York before Boise. Another guy had been in Indianapolis.

I got the impression that some of them knew all the good and bad of this global labor arbitrage game. One said that a lot of Indians want to move to the USA, but you need to work for several years. They are sponsored by their contracting firms. A lot of them get yanked back to India before they are here long enough to get a green card. A lot of Americans are mad about Indians taking American IT jobs. I think the Indians are also getting shafted.

A few of them were impressed by how much I knew about India. I just read a lot and ask people questions. When I spent a month at the incubator in Dallas there were a couple of guys there from South Africa. One of them was amazed that I knew that the three branches of government were based in three different cities. I had read that little tidbit on Wikipedia literally five minutes before talking to them. I also asked if they spoke any Afrikaans; I had heard of that long before. I guess foreigners have low expectations for Americans with regard to our knowledge of the rest of the world.

I have no desire to have kids, but marrying an Indian woman might not be too bad. They have pretty eyes. They have long, straight black hair. I like their accents; when they speak they sound like they are singing. Perhaps I will head down to the nearest temple and who knows? My passport might “accidentally” fall out of my pocket.

Or maybe I will get lucky and all the 3.5 billion other men on the planet will all die and the ladies will have no choice. Or I could save the whole planet. My genitals are large enough to shield Asian women from an asteroid colliding with the earth. Or knock it back out into space if need be. Really. Trust me, it’s big.

Image from Wikimedia, assumed allowed under Fair Use. The first time I drove down that street, I thought: “Hey, that’s the picture in Wikipedia.”