I am now in the sixth season of watching Star Trek: The Next Generation. I have come across a few episodes that I have not seen. But mostly I have seen them. Sometimes I can remember where I was when I watched them.

I first saw TNG when I was at WIU. It had been going for a couple of years at that point. My friends there knew about it. I had watched the movies with TOS cast, but TNG was not on my radar at all. I really only paid attention to shows on the big 3 networks. I remember Saturday Night Live would have sketches making fun of the bad shows on Fox (look for “The Cop and The Prositute”). I think I started watching in the third season. I remember having a conversation that Riker looked like a little kid without the beard. The phrase “growing the beard” was coined, but it has not quite caught on as much as “jumping the shark”. (Side note: He shaved the beard for the third TNG movie. There were only four TNG movies.  The cast from TOS was in six movies. Coincidence? I think not.) So I guess some station in Western Illinois was already broadcasting reruns even then. Sometimes we would imitate the previews: “On the next…exciting episode of Staaaaaar Trek, thenextgeneration”.

I remember my friends at WIU being glad that Dr Crusher was back in season 3.

I kept watching TNG when I transferred to UIUC. I did not see every single episode since I have never owned a TV. But usually I could find someone who let me join in. I lived in the Illinois Street Residence hall, and when the latest episode of TNG was on, there would be several rooms on the floor full of guys watching TNG. In one episode, “Riker falls in love with Soren, a member of an androgynous race known as the J’naii, who dares to be female.” (This was a metaphor for homosexuality, a pretty daring thing to do even in the early 1990s.) At one point, she says to him, “Commander, tell me about your sexual organs.” Someone down the hall yelled, “They’re huge, baby!”

I remember writing a letter by hand summarizing Redemption.

I can remember one guy translating the French in “Time’s Arrow” for a few of us. After I left UIUC the first time, he starting dating a woman no one else on the floor liked, and I don’t remember what happened to him after that.

I remember that I was living in an apartment when “Timescape” aired (although I have not quite gotten that far yet in my current TNG binge). 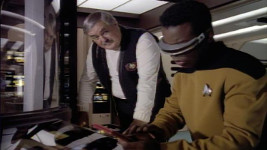 But like Scotty in “Relics“, sometimes it makes me feel old.

I remember watching “Samaritan Snare“. Wesley asks Picard if he ever thought about having children or getting married, if he ever gets lonely. I do remember when Wesley asks Picard if he was always so disciplined. I remember thinking at the age of 19 or so that I was going to be as disciplined as Picard, and I would reach that point long before I got to Picard’s age. Now, I realize that Patrick Stewart is about ten years younger than I thought, and I still don’t feel like I have as much self-control as I wish I had, or as much as my 19 year old self thought I would have by this point.

There were times when I felt I was getting some control. How to get that discipline back?