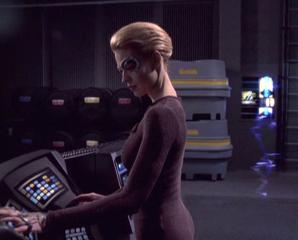 There are now only 13 episodes of Voyager available on the Star Trek site. I will wait a few months to see if they will bring the episodes back. I still have not seen a big chunk of Deep Space Nine either. CBS has taken episodes offline and brought them back before, so I will wait to see what happens.

If they do not come back, I may have to break down and spend money to watch what I have not seen. I might try Amazon Prime. Someone at work told me about this. It looks like you can get a LOT of stuff for $20/month.

I was hoping to get more Star Trek for free. It looks like Comcast will be buying Time Warner Cable. I am pretty certain my cable bill will go up. I know Netflix has had some conflicts with Verizon. I wonder if anyone is on Comcast’s hit list. It would be nice to be able to watch stuff without dealing with all the corporate shenanigans.

I mentioned before that I didn’t think they needed to bring on Seven of Nine to make Voyager fun to watch, and that the other women on the show were pretty damn hot. Well, I think Kes and Torres (forehead, temper and all) are hot. But still, Seven of Nine does have an amazing body. The chest is nice, but for me the waist and the figure are what capture my attention. And the legs. And the rear.

I did not watch Voyager when it was first running, since I did not have a TV. I knew a woman at the gym I went to who was upset that her husband became a huge Voyager fan when Seven of Nine came on. She was very attractive in her own right. I told her that I thought she was at least an 8. She didn’t get it at first.