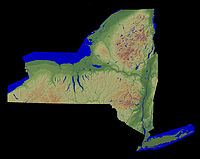 This past Christmas I went out to New York to see my brother and his family. The live on Long Island. Two boroughs of NYC are on Long Island, but when people in the NY Metro area say “Long Island”, they mean the parts of LI that are not NYC.

He is very religious, a Roman Catholic, and we don’t always get along. (He is also a libertarian; how you can be both is frankly beyond me.)

We were not raised religious. Our parents are from Irish Catholic families. My mother went to Catholic school all the way through college. She went to Dominican University in River Forest. At the time it was called Rosary College. They had all three of us baptized, but they stopped going to church before I was born.

He has tried to convert all of us. He even tried to convert our mother, even though she has heard it all before. I don’t understand why religious people can’t get it in their heads that if something was not convincing the first 500 times, I won’t be convinced the 501st time.

Sometimes our phone conversations would degenerate into shouting matches. At one point I decided to limit them to five minutes. That worked a few times. Then once I hit the five minute mark, and I thought that things were going well so I would continue. Then it went south.

He and his wife have two kids. I did not go to the baptisms. I am not going a thousand miles out of my way to go to a church. But I can’t put this off forever, so in late November I called him up and asked if he was open to the idea of a visit. He said he was, so I went.

I drove out there just before the 24th, and I came back starting on the 28th. I really do not like flying. I finally got to Maryland, but only for 12 miles along Interstate 81. So I have now been in all states east of the Mississippi River outside of New England except Delaware. My mother thought I should fly because she was worried a long drive would be a lot of wear and tear on my car.

It was a lot of wear and tear on my car, but it was all in New York City and on Long Island. The roads are in really bad shape; they are very bumpy, there are a lot of potholes, and manhole covers don’t make for smooth driving either. I thought that roads in parts of Illinois were bad. It hurts my back just thinking about it. I know there is a high population density, but they really need to fix their roads. People in the rest of the country wonder why New Yorkers seem so rude. Probably because their brains are getting scrambled every time they drive. Yes, it would be difficult to change things. But in all seriousness, I cannot understand why they don’t do something about it.

On top of that, Long Island roads are not in a grid. It’s like they were planned out by a blind man with no arms. On the way there I got off of one expressway onto another, and I went around 180 degrees, and the street names for the exit were the same but in reverse order. So they seem to have two expressways that cover the same territory. I just want to get from Point A to Point B. If I want scenic, I will walk. I don’t like a layout that forces me to think about things I should not have to think about.

My brother got married on Long Island. Our family came in from all over. Just about all of her family was from there and living there. Long Island seems like a black hole. People go there, or they are born there, and they never leave. My sister-in-law went to college in upstate New York, and that was a big deal. At one point I overheard a women go on about how blessed they were to live on Long Island, in New York and near the ocean. First off: If you like the ocean, fine. Don’t complain the next time there is a hurricane. Secondly: I was a bit irritated that I drove over a thousand miles and I hear the same mentality I hear all the time in Texas.

I also had to pay four tolls for New York City. One to get in and one to get out each way. It would be nice if there was a way to go from the mainland to Long Island without paying a fee. I know Bloomberg did it to end congestion, but if you are just passing through are you really adding to the congestion as much as people who are going to stop in the city?

I made a comment to my brother that people seemed to wait a long time at red lights. A lot longer they need to. I thought that New Yorkers did not seem as intense as their reputation. My brother agreed. He has been told by new Yorkers that he is abrasive and that he talks quickly.

My nephew is the spit-up king. Fear him.

For the most part there was not a lot of religion. My sister-in-law told me that my brother discourages their daughter from using her left hand for things. Most of our ancestors were from Ireland. Some were from the Scottish Highlands. At one point my brother said he hoped that our Scottish ancestors were not Presbyterian. I don’t know if they were, and there is not much we could do about it if they did.

I did tell them about dividend growth stocks. When I was an indexer, I sent him some books (a few mentioned here). But when I explained the concept of dividend growth investing. It’s like compound interest with an increasing interest rate. He seemed interested. I will see if I can find a few good books to send him. I might send him some links to a few good sites.

Climate change data point: I drove from Chicago to Long Island in 2007 for my brother’s wedding. There was a lot of snow in Pennsylvania on the way back. I took a different route this time, but there was no snow at all.

I might go again in July for the first birthday of The Spit Up King.