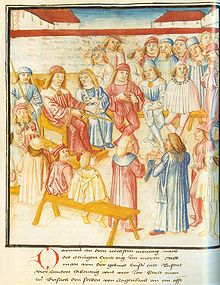 Former Arkansas governor Mike Huckabee has been in the news lately.

First he said that we must become a god-centered nation, and that laws come from god, not from man. Well, Governor Huckster, god is not telling me what to do with my life, you are. Put if you are telling people what god wants, aren’t you putting yourself in god’s place? Isn’t that a sin in your religion?

He also said that he really, really doesn’t want to hate gay people, but he has to. He’s just following orders. He has to be a jerk until a new version of the scriptures comes out. “…It’s really not my place to say, ‘Okay, I’m just going to evolve.'” But it is your place to say that. You are choosing to follow the bible, you are choosing to let it guide your decisions. You are not the passive agent you are claiming to be.

The Immoral Minority lists many other rules that Huckabee is choosing not to follow. He is not advocating helping the poor either, even though that is mentioned many more times in the Bible than homosexuality. He doesn’t think his god is telling him to help the oppressed, but it’s telling him to kick people around. I guess it’s another example of christians doing the easy thing instead of the right thing.

Christians use this excuse to evade responsibility all the time. This happened to me once on the CTA. Some bozo starts trying to talk to me about religion. I told him there is no god, and he told me I was going to hell. He said, “If you have a problem with that, talk to god.” I told him that god wasn’t the asshole pestering complete strangers on the bus.

You should not advocate a position and then evade responsibility for that position.

Image from Wikipedia,  assumed allowed under Fair Use. The picture is of Peter von Hagenbach, who used the Superior Orders Defense in 1474.