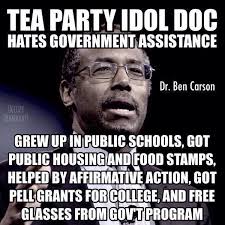 Ben Carson recently said he wants to get rid of the income tax, and replace it with a flat tax. He did not use the term, but that is what he was talking about.

He said that poor people can pay the same percentage as rich people, and then he said it is “very condescending” to say otherwise.

Followed by just about every other Republican.

First off, you trot out the flat tax. And then you tell us it’s just one of your new, fresh, common sense ideas. And that your policies will not favor the wealthy, but instead will be better for everyone. And you think that people will not notice that your new ideas are really the same old ideas, and that you are just another fool carrying water for people who want to bring back feudalism.

Conservative politicians have proposed the flat tax. Many times. They tell us their experts have told them that all we have to do is close the loopholes, and we can make it 10 to 15%, and we can bring in just as much revenue as we do today. And every time, just about every economist who is not advising the latest doofus to push the flat tax tells us that none of it is true. All the other economists say that in order to maintain revenue, the flat tax would have to be closer to 30%, and that low income people would wind up paying a LOT more under a flat tax. And the wealthy would pay a lot less.

And then what happens is the politician pushing the flat tax will exempt people below a minimum income from paying. Which is a concession that the flat tax was regressive even though they said it was not. And makes it less flat and less simple. This happens just about every single time. I think we should pass a law that suggesting a flat tax disqualifies you from elected office.

And a note to Mike Huckabee: You can call the flat tax a “fair tax”, but it is basically the same thing.

What is also condescending, Mister Carson, is you go on about self-reliance and we should get rid of programs that help poor people, when you yourself have admitted that you got government help growing up and would not be where you are today without it. But now that you are successful, you want to pull the ladder up after you and lecture everybody else. Like Paul Ryan and Social Security. Or Marco Rubio with Medicare and student loans. It’s always Republicans who do this. And they seem to think we would not notice. Or that we should change the rules for them. And yet it’s everybody else who is “condescending.”

It seems Mister Carson thinks he is better than all the poor people in this country. That HE can make use of a handout and that they are all too stupid. Yet somehow it’s everybody else who is “condescending.”

I don’t think the GOP really wants to change the tax code. They need the IRS to kick around. Granted, if they hate how the IRS operates, they could pass changes to the tax code, since they have the House. During part of Bush 43’s time in office, they had both houses of Congress, yet there was no simplification of the tax code. I think it is because if we had a flat tax, they can’t promise goodies to people.

Plus, how would a flat tax work in reality? I think the government has the power to levy income tax because of the 16th Amendment. If you wanted to get rid of income taxes, wouldn’t you have to overturn the 16th Amendment? What would stop a future president and Congress from going back to an income tax?

Image from Democratic Underground, assumed allowed under Fair Use.