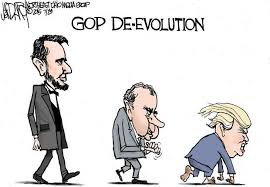 Many people are confounded by the candidacy of Donald Trump.

Given his multiple marriages, lack of military experience, business bankruptcies, lack of religiosity, and much, much, more, a lot of people are confounded about why he is so popular with many conservatives. Yes, he showed up in Iowa carrying a Bible, but that seemed like transparent pandering to me. A few of his companies have declared bankruptcy, which left others holding the bag, so there goes personal responsibility. And he has a few other business practices that seem a bit shady.

And a some of his projects went under in the financial crisis. He and his family would say that those were not properties they ran, they just licensed the Trump name to other people. But I think that still shows a lack of business acumen. Perhaps they should have been more careful who they licensed the name to.

But, as Krugman, Robin and Isquith state, conservatism is not about freedom, or business, or religion. It is about the people in charge trying to stay in charge.

I am a bit surprised that Trump actually ran. I thought he would not because for years he refused to state for the record how wealthy he was. He loved to throw out numbers, but he never backed them up. A reporter for the New York Times wrote a book about Trump, and stated that Trump’s net worth is less than $1 billion. Trump said it hurt his business, and sued the reporter, the publisher and the Times. He never produced any documents or statements to prove his wealth. I am not a lawyer, but my understanding is that the burden of proof was on Trump, and he did not meet it.

I am not clear why he did not produce documents and statements before. He wrote books and gave seminars telling people how to make money in real estate. If you claim you are going to show people how to increase their wealth, and implicitly or explicitly point to your wealth as proof your techniques work, then I think asking you to produce some hard numbers is a fair question.

I was surprised he released some information. But according to lawyer Doug Litowitz, the disclosure forms were so convoluted they really did not tell people what Trump’s net worth is. Many writers and journalists looked them over, and they all came away with different numbers. Litowitz states he thinks Trump might be broke, or at least not a billionaire, based on his investments and behavior.

Maybe like Herman Cain, this is all performance art. Or, again like Herman Cain, this guy is really not all that bright. Or like Mike Huckabee, it’s a way to get publicity and more TV deals. Someone pointed out that Trump has attacked just about every GOP nominee except Ted Cruz. Could this be an elaborate conspiracy to elevate Cruz to the nomination? I don’t think those two are that smart, but that could be the unintentional result.

But I think there might be a question that I think nobody has addressed: If he is elected, what happens with his assets? Elected officials usually sell holdings or put them in a blind trust. From what I can gather, his holdings are vast and complex. Liquidating and moving his assets will probably take more time than any other candidates. Does he have a plan in place to do this?

Politicians do this to remove or reduce potential conflicts of interest. If Trump thinks those standards do not apply to him, then is he any different from the sort of politician he claims to be better than?

Image from Cleveland.com, assumed allowed under Fair Use.