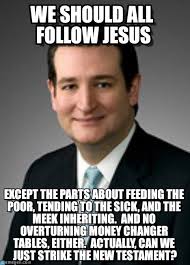 Ted Cruz likes to think of himself as some sort of outsider.

When did he become the insurgent taking on the establishment?

Was it when he went to Princeton?

Was it when he went to Harvard Law School?

Was it when he clerked for the Chief Justice of the US Supreme Court?

Was it when he worked for the George W. Bush campaign?

Or maybe it was actually working for the Bush Administration that made him an outsider.

Or perhaps when he married a woman who works for the firm that has supplied more elected and appointed officials in more countries than any other in history.

Or perhaps it was when he was the Solicitor General for the State of Texas.

Or perhaps it was when he worked for high-end corporate clients at a high-end Houston law firm.

Or perhaps it was when he became a United States Senator.

When has this guy been on the outside looking in?

So maybe nobody in the Senate likes him. But there are only 100 US Senators in a nation of 300 million.

The liberals in Texas, the atheists, the LGBT, the poor, the people who are not white, the people that Ted Cruz chooses to ignore as Senator and that he has promised he would ignore as President: They are the outsiders.

If you can go around and say that atheists and gay people will one day have no place in America and have a chance of making that happen, if you can promise people that millions of other people will have fewer rights and you have a good chance of being able to one day carry out that promise, then you are not an outsider. You are the very thing you claim to be running against.

Image from Dr. Rex’s blog, assumed allowed under Fair Use.

One Reply to “Outsider?”