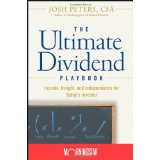 A while back I got Josh Peters’ The Ultimate Dividend Playbook: Income, Insight and Independence for Today’s Investor. It came out in 2008, and I read it just a few years ago. Here are some notes that I took on it. I am going to post them mostly verbatim.

He says to focus on cash flow more than price. Cash flow is the ultimate indicator. If a private equity firm want to take a company private, their offer price will be based on the company’s cash flow (page 31). Also: During the Great Recession, many dividend paying stocks went down in price 30% but still had cash flow and still increased their dividends.

This book was written in 2007 or 2008. His dividend builder portfolio has a lot of bank stocks, no oil companies, and few utilities. Granted, now in 2016, oil companies do not look like such a great bet either.

He says dividends can be a signal. An article in the Motley Fool [URL not saved] points out that US firms pay consistent amounts. It may leave less to invest. True. One commenter asked why would anyone buy GM if it had a payout of 8%? Yes, a high dividend like that is a warning, and I think dividends are more likely to send a warning signal if a company pays out a consistent amount.

Intersting to note: I think all DJIA stocks pay dividends. For a long time MSFT did not.

Peters says chemical firms do not have a moat. The book has a section on the tax complexities of MLPs, and appendices on different industries.

Personally, I plan on avoiding MLPs. Kinder Morgan bought two MLPs for which it was the general partner: Kinder Morgan Energy Partners and El Paso Pipeline Partners. I think Richard Kinder helped invent MLPs. If he thinks they are no longer a good idea, who am I to argue?

Image from Amazon.com, assumed allowed under Fair Use.