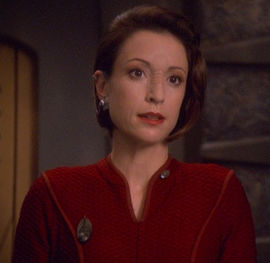 I don’t know if “Deep Space Nine” is my favorite “Star Trek” series, but it is the top choice of a lot of fans.

It was certainly different than The Original Series or “The Next Generation“. There are a lot of quotes on Memory Alpha from the producers that they wanted to do something different in the Star Trek universe, and they certainly did. But sometimes they seemed to be bad-mouthing the prior series. It is easy to look back a couple of decades later and say that DS9 made TNG look like it was standing still, that in some ways TNG was just a re-hash of TOS.

In some ways, TNG was a re-hash of TOS. But I don’t think it could have been anything else. At first, a lot of Star Trek fans did not accept TNG. This was in the early years of the spread of the internet amongst the general population, and pages and posts about why Kirk was better than Picard were all over the net. But after the third season, and “The Best of Both Worlds” in particular, a lot of that stopped and I think TNG was seen as a legitimate incarnation of Star Trek. DS9 producers loved to say they broke the mold, but if TNG did not become successful, there would not have been a mold to break. I think if TNG was not successful, the franchise would probably have ended there.

One thing that was new (for the time) was that DS9 was the first Star Trek to have story arcs. This is common now in prime time television, but then it was pretty new. Although, reading through the articles on Memory Alpha, I think they came up with some of the story arcs while the series was in progress. There were a couple of episodes in the first season about alien groups on the other side of the worm hole that we never heard from again and seemed to have no connection to the Dominion or the later story arc (“Captive Pursuit”, which I liked, and “Move Along Home”, which stunk then and still does).

I think the first season of TOS was the best, and while the other two seasons had good episodes, the show did get weaker as time went on. It seems like the spin-off series have all needed a couple of seasons to really find their groove. DS9 was no different.

TOS was pretty much a three-man show: Kirk, Spock and McCoy. There were a few episodes with Scotty as the main character, but there were no episodes primarily about Uhura, Sulu or Chekov. TNG was more of an ensemble show, and that seemed to continue through the rest of the franchise. I think Enterprise was mostly a three-character show (Archer, T’Pol and Trip), closer to TOS, but it was trying to be a franchise show. I think the episodes with Travis and Hoshi as the primary characters were some of the weakest. I think the producers never figured out how to use them. I am not a tv show producer; maybe that sort of thing is only obvious in hindsight.

But DS9 not only figured out how to use all the characters, even the recurring characters were strong and used well.

One Reply to “Thoughts On Deep Space Nine”