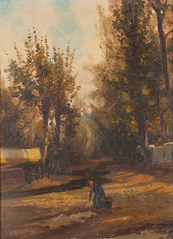 Here is the dividend income report for March, 2017.

In February I bought Aqua America, which pays in “C” months, but I did not buy it in time for the March payout.

I am thinking about decreasing my oil stocks (or even getting rid of them altogether) and getting more water utilities. Right now the yields in water utilities is kind of low, but I think long term it is a better bet than oil companies. I think we will be using oil for a while, but the past few years have been a wild ride for oil companies, and I don’t think things will calm down anytime soon. There seems to be a lot going on in a lot of industries that have a lot of dividend payers: Utilities, banks, railroad companies. I wonder if the dividend revival that we have seen in the past decade will last the next downturn.

I have been thinking about putting some of the money I have in a taxable account into some ETFs. I am thinking about buying shares in a real estate ETF, even though a lot of people say real estate is also overvalued. Granted, I think people have been calling everything overvalued for about five years now. Maybe it’s time to just bite the bullet.

Here is a table with the year-to-date amounts, the monthly amounts, and the three- and twelve-month moving averages for each March from 2012 through 2017:

Here are the stocks and the income amounts for March, 2017: