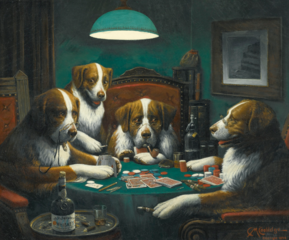 Here is the dividend income report for August, 2017.

I have thought about selling ExxonMobil. I think that oil companies will probably go down in value. I think they will definitely have fewer employees in a few years. I am still above my cost basis. It has gone up because of Hurricane Harvey. Usually hurricanes wipe out investments. Now one is helping bail me out. A hurricane is keeping my Exxon shares afloat.

Here is a table with the year-to-date amounts, the monthly amounts, and the three- and twelve-month moving averages for each August from 2011 through 2017:

Here are the stocks and the income amounts for August, 2017:

Portrait of the dogs playing poker by Cassius Marcellus Coolidge (September 18, 1844 – January 24, 1934), available at Wikipedia, assumed allowed under Fair Use.