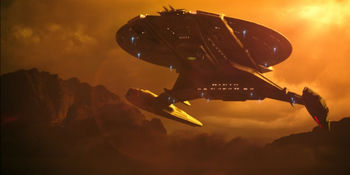 I watched the first season of Star Trek:Discovery. The verdict: I liked it.

I was afraid that the series might flame out pretty quickly. The original series started strong and frankly got weaker, while the previous spin-offs were just okay for the first season or two, and really got going in the third season. There are a lot more series on television now, and a lot more channels in general. A series no longer gets a season to find its footing. But Discovery worked out okay.

I do wish we got at least one more season of Enterprise. I think the Romulan War would have been interesting. I think that is where the whole series was leading. On the other hand, if they were serious when they said that Future Guy was Archer then perhaps we dodged a bullet. I think the showrunners might have gone full Roddenberry: They were no longer worthy to manage their own brilliant creation.

I think the first two seasons of The Next Generation were almost a different series. Gene Roddenberry was still running things then. For seasons three and four, he wasn’t involved, but he was still mentioned in the credits. Some of the characters were not quite fully formed for the first two seasons. Geordi was just this guy who wore a visor, and….that was about it. And I think with Worf we were just supposed to be impressed by having a Klingon on the bridge of the Enterprise. From the third season on things improved. I think making Geordi the chief engineer was a good move. It’s a bit of a Star Trek cliche, but a show should pick a chief engineer. For the first season of TNG, there was a different chief engineer every time they went down to Engineering. It’s a starship, not a fast food joint.

One reason I think TNG was a different series is the character of Wesley Crusher. I never really liked that character. (One interesting paradox in science fiction is everybody hates Wesley Crusher, yet everybody likes Wil Weaton.) It was irritating and unbelievable that he easily figured out solutions that Starfleet officers with combined decades in space could not see. Frequently the problem at hand was something he read about for school that very same week. I am sure that sort of thing could happen, but not all the time. It’s amazing nobody ever suggested they should all learn how Wesley thinks about things so they could be as efficient as him. Nope, they were just amazed every single time. Wesley was shipped off to Starfleet Academy about the same time Roddenberry died. I think that Roddenberry had plans for the character, and after he had to step back from the show due to his health, the other producers did not have the heart to get rid of him while Roddenberry was around.

One thing I had forgotten: Wesley failed his Starfleet Academy entrance exam the first time. He is smarter than all the officers, but flunks the exam? What the Ferengi???

Season 7 got a little weird, which sometimes worked and sometimes did not. Some of those episodes were just different, and some were out there. It was kind of like the fifth season of Bablyon 5. A lot of people liked “Lower Decks“, but I did not. “Sub Rosa” was out there. I liked “Parallels“; probably one of my favorites of the entire series. I also liked “Masks“, although a lot of the staff did not.

I don’t think there is a series that I do not like (although I have no desire to try the animated series), although some had some weak episodes, even weak seasons. I think Deep Space 9 might be my favorite series overall. It had the best characters overall: great villains, even great recurring characters. I think having an overall story arc really made it stronger. Granted, while arcs are common on TV now, it was just becoming more common during the run of DS9; TNG just missed it. I think the best episodes of Enterprise were the ones that were in story arcs. Most of season three was one arc. But they threw a couple in that had nothing to do with the Xindi; one of them (“Extinction”) was the worst of the season, if not the series. Coincidence? I think not.

Back to Discovery: I liked it. The Mirror Universe is always a crowd-pleaser.

There are a few things that I did not like. I thought the Klingon war got wrapped up a bit too quickly. Maybe I was just hoping it would last longer. I do think that they could have gotten a few seasons out of it. I read on the Discovery sub-reddit that the original plan was to have a different crew for each season of Discovery. I think that would have been a very bad idea. But I think that explains why the Klingon war was ended so suddenly.

I also have read that the showrunner was replaced. I am not too clear on why. I don’t follow the behind the scenes stuff too much. Perhaps the new boss did not want to deal with the old boss’s stuff. But from what I have read on the sub-reddit, I am not the only one who thought the war ended too abruptly. [Note 1]

Another thing that I did not like is that sometimes Michael Burnham seemed a bit too much like Wesley. Maybe Wesley was just a magnification of an odd phenomenon in Star Trek: Sometimes they know an awful lot about an awful lot of subjects. They are dealing with technology that is far beyond what we have today, yet they all seem to be able to fix the warp drive, and the transporter, and the replicator, and fly a shuttle, and shoot pretty well, and this, and that. Which brings me to Paul Stamets. I guess we will see more of Stamets, since we will be seeing more of Culber (presumably through flashbacks). But Stamets will not use the spore drive. Will he stick around and manage the conventional warp drive? Again, these technologies would be beyond what we have today. People with degrees in physics do not just go off and become chemical engineers. But now Stamets is going to be an expert in warp drive after spending years trying to perfect the spore drive.

Plus it takes place before some of the other series. I try not to be one of those people who complains when there is an inconsistency. It’s fiction. There are plenty of people in the real world who are lying.

I did not like Tilly most of the time. Too much post-modern “let’s joke about everything” irony. Wouldn’t people be a bit more serious during a war? And stuck in a parallel universe. Besides, we already get enough sass with Stamets, dammit. And I am going to come out and say it: She looked too heavy to be in the military. To be frank, everybody else looked pretty fit, like they were ready to fight a war. Even Stamets, the character with the least military bearing, at least looked like he would fit in on a military vessel (as long as he keeps silent). They had to give Stamets some leeway because he was the expert on the spore drive. Tilly would have no excuse for being silly.

And before you get upset: No, I am not where I want to be either. I have come to realize that training more is not that hard, but eating less is.

This Star Trek has a pretty high body count. There were other series that took place during wars (like DS9), but Discovery had a lot of characters who appeared on-screen and bit the dust (and a few implied off-screen): Philippa Georgiou, Culber, Landry, the real Ash Tyler (which sounds like a twitter handle), Mirror Stamets, and both Lorcas (even though we only see one). Wearing something other than red no longer saves you.

I was not too thrilled with the look of USS Discovery. I thought the USS Shenzhou was a better looking ship.

I liked the first season, and I look forward to the second season.

Note 1: I strongly suspected that Discovery would be about Klingons after CBS put a stop to the fan film Star Trek: Axanar. I figured one reason had to be that the proposed fan film was about a similar topic to something CBS was planning.

Big Jim honors the past, but doesn’t want to be trapped by it.

One Reply to “Thoughts On Discovery and Star Trek In General”