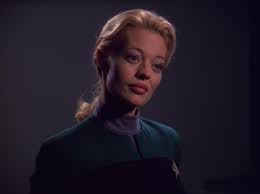 I have not seen any episodes of “Star Trek: Picard” just yet. I wanted to get some thoughts I had about my own ideas for a Star Trek series (not that I have any illusions that this series would ever get made).

One reason I want to write about this before watching “Picard” is that I have seen the previews for “Picard”, and there is a slight possibility that a few of my ideas overlap with theirs. (Or all, or none; I won’t know until I watch it).

About ten years ago, someone set some clips from the original series to the song “Tik Tok” (as the contributor pointed out that “Working on the Enterprise is pretty much a non-stop party as far as I’m concerned”). I thought that there should be a new “Star Trek” series. Watching the clip made me realize that there was a lot of visual diversity in the original series. Traveling to other planets and exploring strange, new worlds lets you go to places and build sets that you cannot do in other series.

I kicked around a few ideas in my head on occasion, and I came back to it when I needed some topics for the idea list.

I was in college during “ST:TNG” and the first few years of “ST:DS9”. “ST:V” ended in 2001. I thought a new series should take place 20 years after “Voyager”, as “Picard” is doing. It would avoid any problems of possibly stomping on canon. I like “Enterprise” and “Discovery”, but I think that new shows should take place after prior shows and try to do their own thing unencumbered. Granted, I have no idea what will happen in the third season of “Discovery” or “Picard”, so all future Treks will be further constrained.

There is the Red Angel suit in Discovery, but I am guessing that knowledge was buried, just like the spore drive.

Every other time in the first four series and movies when the crews have traveled through time, they have either used alien technology (the Guardian of Forever, the Devidians in “Time’s Arrow” or the Bajoran Orb of time), natural phenomena like sling-shotting around the sun (which in “Star Trek IV” somehow got them to go both backward and forward in time) or the Nexus in “Generations”, Q going through time with Picard in “All Good Things…”, severe equipment malfunctions (“Past Tense” and “Little Green Men” in “DS9”) or future Starfleet personnel bringing a series’ crew forward or visiting a series’ crew in their own time (“Future’s End”, pretty much all time travel in “Enterprise”).

I thought that perhaps the series could be about the crew that is developing the first home-grown time-travel device for Starfleet. They could also be doing other research, combining what they are doing with both the technology that Voyager brought back from both the Borg and the future.

I thought that it would be a combination research vessel and perhaps also going on regular missions. Or perhaps they stay in stealth mode (I use that term the way startups do, not referring to invisibility). I like the Nova class ships we saw in “Voyager”. Maybe they would be a combination of research and a smaller version of Section 31, although Section 31 might be an occasional adversary of our crew. The ship would have a combination of conventional and experimental systems, for propulsion, weapons, transporter, sensors, life support, medical, etc.

I thought the captain would be someone about my age (who wouldn’t want to be the captain on “Star Trek”?). He got a degree in warp engineering, enlisted during the Dominion War, or perhaps during the Federation-Klingon War that preceded it. He was convinced to stay in Starfleet and become an officer by his captain, and rose through the ranks. He spent a lot of time in research and on engines, since energy is the key to everything else. His crew is not only conducting their own research, they are combining it with future and Borg technology. Their ship was based on various planets, and they have had to keep moving to prevent detection, although the captain and his CO suspect there may be leaks.

In the pilot, they had energy dampeners around the system to prevent any radiation or signals from being detected, but these were destroyed one by one, and the ship manages to escape. Barely.

There would need to be a good reason why a research vessel is moving throughout Federation territory, and not stationed on one planet. I guess it could be like DS9, where they make side trips. I don’t want it to be like the pilot of “Voyager”, where they do a smart thing for a dumb reason. A ship in the Delta Quadrant was a good concept, but having Janeway blow up the array was a stupid idea. Why not have the Kazon blow it up to trap Voyager in the Delta Quadrant?

In one of the early episodes, their ship would be attacked by mercenaries and they would have to escape and go to warp to a star base. The captain and admiral would somehow come to the decision to launch permanently, and there would be a military contingent on board. The captain has not had to be in battle since the Dominion War, and while the ship has made journeys of up to a few months, they would need someone with more field experience and battle training.

I thought the second-in-command should be a black woman. (This was before “Discovery”.) I know the show-runners of DS9 liked to dismantle the idealism of ST. I do think “DS9” was probably the strongest series to date, I don’t really agree with that idea. I think one of the appeals of ST is that it represents our ideal selves. Sisko was in the end one of the good guys. And it just bugged me that we have seen more Starfleet captains who were aliens than women of color. 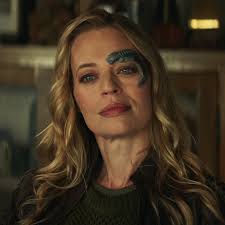 One consequence of the secrecy is that the entire crew of the ship would be human, which many people will regard as unusual for Starfleet. I go back and forth as to whether or not they would stay in stealth mode. If they do, then they would be taking our promising first officer out of circulation. This would also cause people to talk. You might get a few plots out of the need to hide their affiliation/identity.

A third main character would be a hologram. I will be interested to see how “Picard” integrates holographic characters. It has been 20 years since Voyager. What use will they have in Starfleet? Are there special missions/duties that only holographic characters can have? I thought this character’s appearance was based on the captain’s son who died as an infant. Perhaps some of the experimental medical technology was used to infer his appearance as an adult.

I thought I heard Michio Kaku state that time travel would only be possible to the future, and that the point that time travel becomes possible would be the earliest anyone could go to. (I cannot find anything saying that after a few minutes of googling; I did find a file of him stating that time travel is possible if you have LOTS and LOTS of energy). So at first they could only go forward.

When I was using this series idea as a “feedstock” for the daily idea list, I recall that I spent several days on ways the Star Trek universe could have changed since “Voyager” and “Nemesis”. I did not keep any of these notes, so I will have to reconstruct from memory and possibly make some stuff up on the spot. One reason I did this is that I have heard/read that the best sci-fi takes place in worlds/universes that are well-developed. You don’t just need great characters and cool technology, you need a firm context for all of this to be happening in. In addition, Gene Roddenberry said one of the reasons he created “Star Trek” was so that he could talk about contemporary issues and still get things past cagey network executives.

I think that one scenario is that the Romulans found out about the time travel experiments, and they are trying to get it. And some Romulan groups are also funding the Cardassians to cause trouble in what used to be the DMZ. The Original Series made it look like the galaxy was involved in a Cold War between the Federation and the Klingons, which was analagous to the USA and the USSR. I think we are entering a multi-polar world (the USA and China are dominant, but there are plenty of countries doing their own thing, like Iran and Russia, and China’s control over North Korea seems lacking). I always thought the Romulans were the most interesting aliens in Star Trek. I think JJ Abrams made a mistake blowing up their planet. Or perhaps they see the time travel machine as a way to stop it. Or perhaps just as there are always “patriotic Russians” willing to do what Russia wants, there are patriotic Romulans.

There might be a Romulan villain, and he/she and the captain are constantly running into each other. Every good hero needs a good villain. I think that is one of the things that made “DS9” good: It had a lot of interesting recurring characters, and some of them were the bad guys.

The series could be like “Discovery”, with a new story arc every season. One could be about the Borg. I saw a shot of a Borg cube in one of the “Picard” trailers. What happened to them after (ANOTHER SPOILER FROM THE YEAR 2001) Future Janeway infected them with a pathogen? I thought they could break up. Some are still the same old Borg. Some ask people to assimilate voluntarily (long life and infinite knowledge is not a bad deal if you choose it). Some are mercenaries for hire (fuel and bodies being the price). Some are Borg xenophobes who destroy other planets. Some are hard-core Borg purists who destroy other Borg who have strayed from the way. These factions would not be equal in size.

Another season could deal with members of Voyager’s crew. Some decided to stay in Starfleet, some went into the private sector. But perhaps some became guns for hire, working for the highest bidder. Their experiences in the Delta Quadrant as well as their determination to get back to the Alpha Quadrant might give them some unique advantages. Perhaps they found 24th century suburban life too boring. Perhaps some tried to get back to the Delta Quadrant. Perhaps Starfleet regards some of them as knowing too much to be out in the wild. I know Seven of Nine is in “Picard”. We shall see how she fits in. I thought of the Voyager crew angle before I saw the previews. I have a sad that she does not seem to be wearing the catsuit.

Now that I have that out, I can go watch “Picard”.

Big Jim wonders: Do all women look good in Starfleet uniforms, or is Jeri Ryan beautiful no matter what she is in?

Images from Memory Alpha, copyright owned by CBS, assumed allowed under Fair Use. I will admit, I have no idea how much we will see Seven of Nine in “Picard”. It’s just an excuse to add a few pictures of Jeri Ryan.

2 Replies to “Thoughts On A New Star Trek Series”